In the summer of 2017, the members of the ERTF were invited to Saffron Walden Museum to view the displays and a selection of items from the museum stores, and learnt more about the fascinating stories associated with the items.

The textile artists took photographs and made sketches, which they used as points of reference and produced their own creative responses in a range of mediums and techniques from felt-making to eco-dyeing, appliques and lace work.This exhibition showcases their artistic responses and the items that inspired them.

"Saffron Walden Museum is a marvellous local resource. we are extremely lucky to have it" 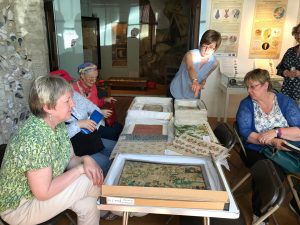 They are divided into themes: People & Place, Collecting & Connecting, Naturally Inspired, Objects in Time and the Saffron Crocus.

The artworks provide a great snapshot of the town’s traditional industries, its architectural features, and the Museum’s eclectic collections.

In an age, where many towns and cities tend to look much the same, Saffron Walden stands out from the rest, with its beautiful historic buildings and landscapes. The textile artists have managed to capture a real sense of Saffron Walden in their work.

Some key sites around the town really inspired the artists, most notably the Spider Window from The Close, St. Mary’s Church and the Edward VI alms-houses.

Throughout the exhibition as a whole, the intricate knot work in the Dutch Garden, Bridge End Gardens, caught the imagination of the ERTF artists.

One fascinating example of hidden history is Hannah Heys’, Faceless Women of History, in which she has created her own depiction of Gertrude Bailiie-Weaver, President of SW and District’s Women’s Suffrage Society, whose role has been documented, but who has never been widely celebrated or depicted.

The Museum’s collections of over 160,000 items span a wide range of genres from Local & Social History to Natural History and Geology, Archaeology, Costume & Textiles to World Cultures, so there is something to interest everyone. Consequently, the members of ERTF had a quite the task, selecting what they were going to work on.

A number of the artists were inspired by the breadth of the collections, and chose not to focus on one or two items, but on a range of items.

Liz Holliday’s hats in particular reflect the origins of the 19th century Museum and the great collectors and benefactors whose passionate collecting formed it, most notably the Gibsons, Helder Wedge, Bennett and the Clarkes. Her hats reference fossils, mineral crystals, a Viking ring, Roman coins, a Polynesian finger bowl, an ancient Boomerang and a carved head from Sierra Leone, to name just a few!

The textile artists have chosen a range of eclectic items from the collections to inspire their work. In addition to our natural history and geology specimens, you can see textile artworks inspired by an earthenware Medieval smoke vent from Great Easton, a pineapple-themed tapestry, a glove which allegedly belonged to Mary Queen of Scots, decorated wall plaster fragments and a tile from the Sun Inn.

Synonymous with Saffron Walden, Saffron crocus bulbs were farmed here as a cash crop in Medieval and Tudor times. The plant itself is purple whilst the stamens, when dried to form the spice Saffron, are dark orange in colour, but when the stamens are used for dyeing textiles, they produce a vivid yellow colour.

The textile artists based their artworks inspired by the Saffron crocus on a range of sources – a number used the pargetting block on display in the Local History gallery, whilst others carried out their own research. Magenta Kang for example found a motif of the crocus in the plates of the naturalist, John Gerarde’s 16th Century book Generall Historie of Plantes.